In just its second year, the Boston International Kids Film Festival more than tripled attendance, revenue, partnerships and media coverage. It was a resounding success! We showed nearly 50 films from around the world (including a block of films from some very talented middle and high school students), and welcomed filmmakers from as far away as Turkey, Mexico, Canada, California, and Florida.

It all kicked off on Wednesday, November 6 with a special screening of Annie: It’s the Hard-Knock Life, by director Josh Seftel. With one of the smallest (and most vivacious!) Annie actresses with him, he took questions afterwards about decisions he made as he created this film – which at its heart is about the creative process. 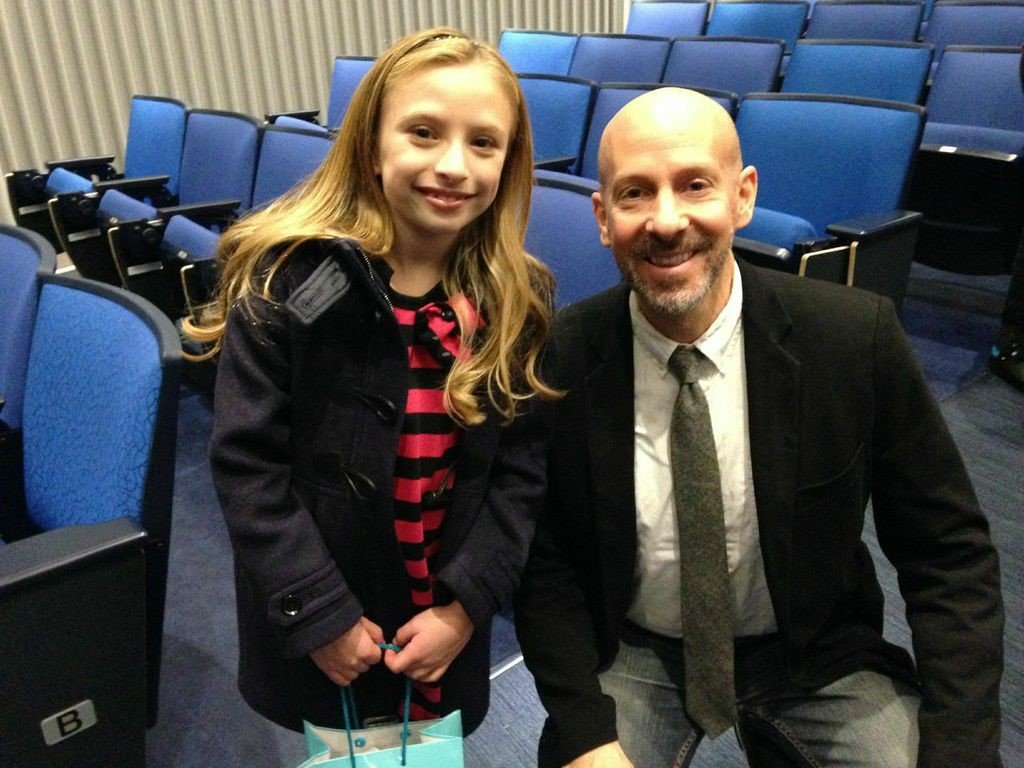 From Friday to Sunday we showed films and offered workshops, including two new ones that both sold out: on the art of conversation, and on the intersection of creativity, film & autism. In the latter, we had the honor of bringing in two amazing high school students: Alexandra Jackman of New Jersey, and Hugo Segal of New York. Alexandra won the festival’s top honor: The Peggy Charren Award for Excellence, named for the pioneering woman who in the 1960s fought to make children’s television less overtly commercial. This high honor every year goes to a young person who uses the medium of film to make the world a better place. In Alex’s case her documentary – A Teen’s Guide to Understanding and Communicating with People with Autism – helps typically developing teens gain an understanding and appreciation for their autistic peers.

Hugo Segal is one of them. Diagnosed as being on the autism spectrum at a very young age, Hugo has learned a lot about working in groups, focusing, understanding visual cues, and reading emotions, through the process of learning how to make animated films. At age 15 he is now quite an accomplished filmmaker, and we were pleased to show three of his animated films demonstrating a trajectory of his work. Afterwards he shared his own personal story, and met Alex – one of the highlights of the entire festival for me. I look forward to seeing a collaborative film some day by these two very talented teens! 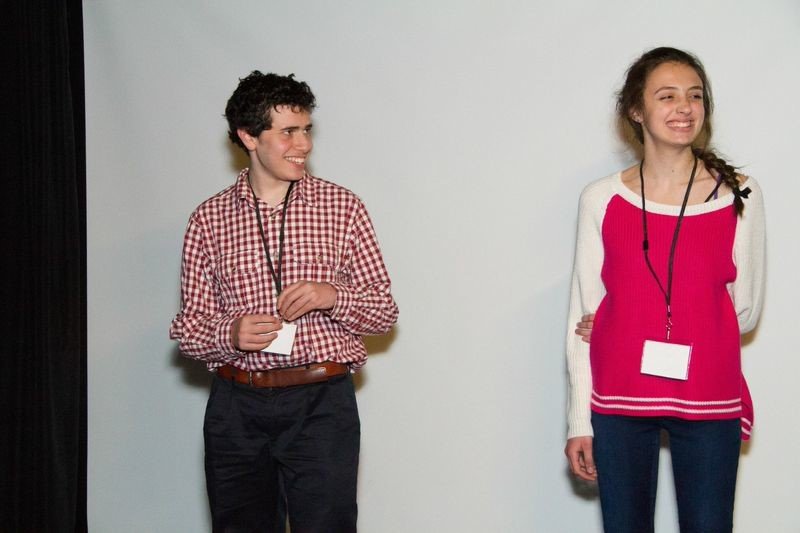 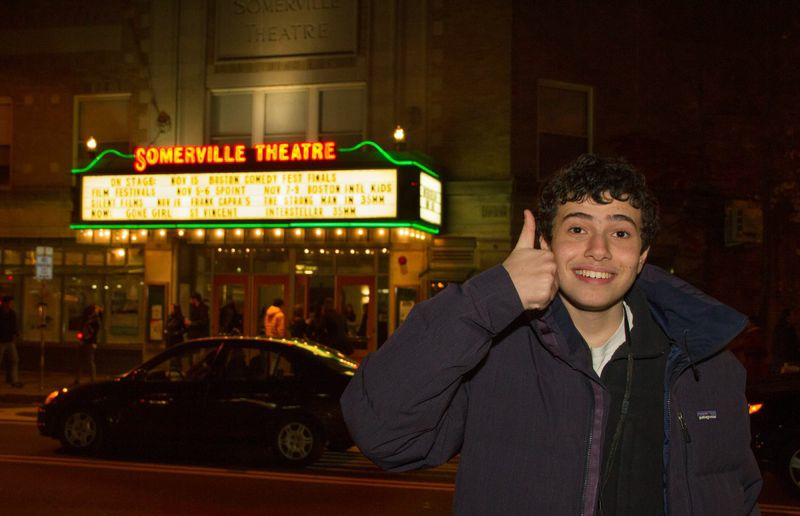 Hugo Segal in front of the Somerville Theatre, where 3 of his films showed. Photo by Emily Falcigno

It was incredibly heartening to gather together so many talented young filmmakers! My impression is that this generation is poised to make a huge difference in the world through their films. They like zombies and mysteries and surreal animations, and they also care about what it’s like to be an outsider – whether that means someone who is bullied, deals with depression, has physical disabilities, or any other issue that makes life challenging. These are sensitive, smart and extremely thoughtful kids, and it’s an honor to connect with them – and help them connect with each other. 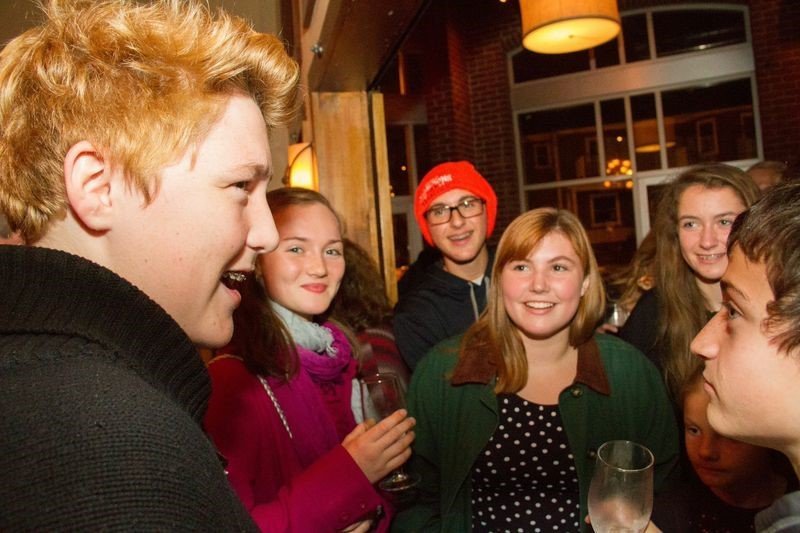 Student filmmakers line up to introduce themselves and then meet and greet at one of the festival receptions. Photos by Emily Falcigno

Before the final wrap party we gave out seven “Oculus” awards for the best director and film in each of the following seven categories. Check out the links to their films!

Peggy Charren Award for Excellence: Alexandra Jackman: Producer: A Teen’s Guide to Understanding and Communicating with People with Autism 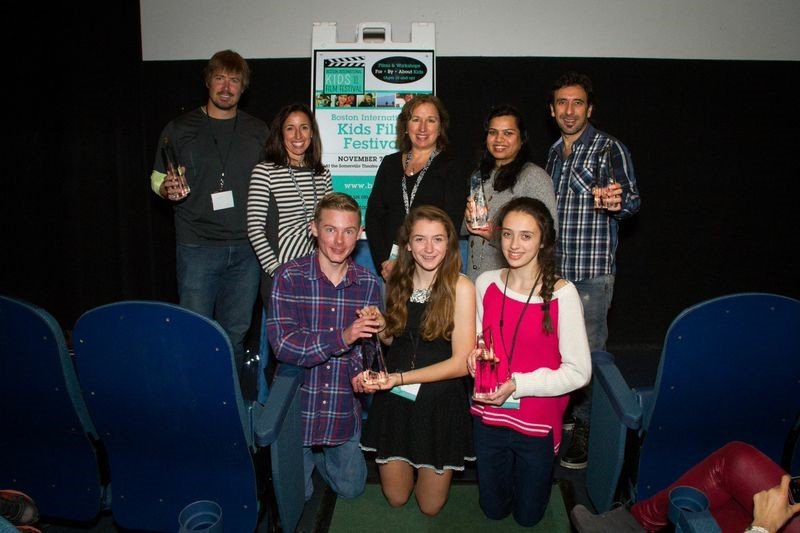 Here is an observation as I end this 3-part series of posts about the 2014 Boston International Kids Film Festival. Nice people make the best films. This isn’t science, but is something I observed this year through the films I watched and directors I had the pleasure to meet. Warm, smart, open-hearted people tend to get the best from their subjects, whether in fiction or documentary. It stands to reason, of course, because being a filmmaker requires spending a lot of time with your subjects and earning their trust. Still, it was a beautiful thing to watch in action. … and it was my pleasure to have been part of the whole endeavor.