While I was teaching a class on the psychological impact of our digital world to a group of college students in an Effective Communication class, we got into the research on how social media contributes to “group think.” Students were reflective of their own behavior as we discussed this powerful emotional pull to agree with the people in a social media discussion, regardless of how nasty those comments can be. For example, in the “mob mentality,” aggression and negativity can be contagious. The hostility of one dynamic personality can have a powerful influence over others. For adolescence, this influence can be especially tough to resist, as developmentally it’s a time where they crave a sense of belonging, even if they have to compromise their own sense of morality.

I noticed a young lady in the front row looking up at me as tears were welling up in her eyes. She said, “I didn’t know.” 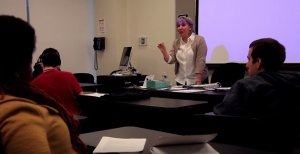 “Well, my mom was working and so when I came home from school every day, I would spend all my time socializing on Facebook. My mom felt safe because I was in the house, but she had no idea what I was going through. People were mean to me, but I know I was really mean to people.”

There was an actual sigh of relief when she said, “But I didn’t know the thing you were saying about negative behavior. I just thought I was an asshole.”

A new study shows Cyberbullying is at an all-time high. In the past six years, incidents of digital abuse have increased sharply, from about 15 percent of students saying they experienced cyberbullying, to 21 percent, as face-to-face bullying has decreased by three percent, according to a study by the nonprofit Education Development Center.

As validating as this research is, the studies were concluded in 2012. In the digital age, things change on a dime. For the past couple of years, kids and young adults have already moved on to a new type of online bullying where their behavior is less accountable, but no less damaging.

One 18-year-old high school senior explains, “subtweets are the big thing now, and it’s really bad with girls.” She explains that kids set up digital “friend groups” on their smartphones for chats. Then, they create a new “group” to chat/gossip/insult one girl from that group without that girl knowing. “When they want to really be mean, they take a “snap shot” of the names in the “group chat” to post on the twitter page of the “target” girl, with the clear intention of letting her know  “we’re talking about you without letting you know what we’re saying.”

(Editor’s note: A seminar in Connecticut this week will provide tools for people working with youth.)

Yik Yak, a site where kids post the most horrific comments about a person anonymously, and Snap Chat, that destroys evidence of bad behavior, still shape developing personalities, whether there is a penalty for the behavior or not. Kids who bully are also being bullied themselves making the “bully-victim” a New focus of research.

Cyberbullying is all about wielding power. Our technology now allows every individual to have enormous power, for both good and bad.

Dr. Steven Freilich explains, “We have elevated our communication processing and manipulative abilities tenfold from where it was.  We have not, however, awakened to the reality of exactly how much power this truly represents for many reasons including that it looks so different than a nuclear reactor or high-tension wires.”

Famed Red Sox pitcher Curt Shilling was outspoken and shocked about the “vial” comments on his twitter page when he simply posted a congratulations comment about his daughter. His reaction illustrates that the general public doesn’t understand that kids are exposed to these personal, mean-spirited exchanges every day. Comments that were recently considered “unacceptable” are now normalized and not even reported as cyberbullying

What is the trade-off for such a connected world? In order to be a participant in what can be a Russian roulette type of environment, where you can be the victim of a negative “shot” when you least expect it, kids are having to develop a thicker skin, leading to less empathy in their overall personality.

For some, the pressure of dealing with the personal judgment and constant comparison to others can be too much. That pressure is linked to mental health issues. In addition to the increasing statistics of cyberbullying we’re seeing increases in stress, anxiety, depression and suicide. According to the Centers for Disease Control, “after years of decreasing statistics, suicide rates began increasing again in 2012.”

Freilich explains, “It is about kids, bullying, growing up and so on, but it is equally about the device that does have power in and of itself.”

Media and Digital Literacy is about understanding and respecting the power and influence of our communication tools. Because our digital world changes so fast, it’s critical to make Media Literacy part of our education system so we can constantly address the fast pace of these damaging trends as they are unfolding.

About the Author: Joni Siani

Joni Siani is a Media Literacy scholar, author and filmmaker of Author/Filmmaker: Celling Your Soul: No App For Life.