I boycotted The First 48: The deaths of Black & Brown bodies are not entertainment! 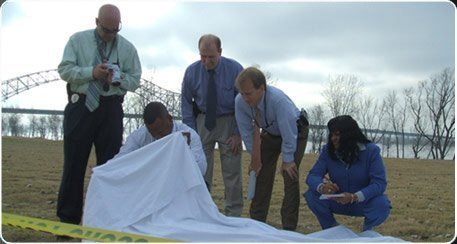 The First 48 is an A&E reality TV show about homicide investigators.

I will no longer watch the A&E reality TV show The First 48, in an effort to live as an intentionally Media Literate Individual. With the rise of coverage of police brutality and deaths of Black and Brown bodies most of us are engrossed in via the news, print publications and online, I am constantly reminded why I stopped giving this homicide investigation show my time and attention.

So no more watching day-long marathons of that spiritually-depleting fear-porn; spending hours on the couch witnessing so much violence and so many ruined lives — most of which belong to people of color like myself. I felt icky right down to my core after consuming each tragic episode that would have been unimaginable to see in the early days of TV, half a century ago.

I had become de-sensitized to the killing of Black and Brown people and able to easily digest (intentionally graphic word choice) those same dead bodies at the scene of a crime. Similar outrage that lead to the conflict in Ferguson over Mike Brown’s body lying dead in the streets for 4.5 hours has been taking place on our TV screens in the form of “entertainment television” for the last 11 years.

I stopped watching the show because I was numbed to both sympathy for and empathy with those Black and Brown bodies – bodies that could easily have been mine or that of any of my 9 brothers or sisters.

When I think about where the concept of showcasing the deaths of Black and Brown bodies began, I am drawn back to the mid 20th century. Since very early in television history, there have been ploys to normalize the negative treatment of people of color in society through political propaganda and fear-mongering. From Vietnam War imagery to Blaxploitation movies, violence against communities of color have been used as entertainment or to make the point that anyone that was non-white was inherently savage, uncivilized and dangerous. All of the commercials, TV shows and other visual-campaigning were developed to shift viewer’s mindsets to accept stereotypes as broad generalizations and factual depictions.

Today, the propaganda on Black and Brown Inferiority has taken a different face, on shows like Gangland, LockUp and The First 48. It’s pretty obvious that the footage that makes the air and the cases that are shown are those that feature predominantly Black or Brown suspects or victims.

Who are these shows meant for? Why should we be entertained by this? How is this supposed to make us feel? Why are the majority of their cases featuring Black and Brown people or communities? Who is making money off of the exploitation of the deaths of these victims? Why haven’t more people boycotted this show? Why are we so comfortable with this?

These are the questions we should be asking.

So I stopped subscribing to the ratings, which inform the networks to keep shows like this on the air. It was the right decision and I hope to influence more people to carefully consider their viewing choices.