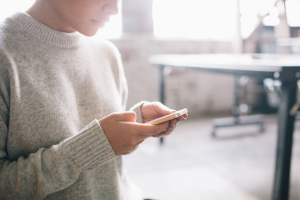 Last week the results of an important new survey were announced by the Association of American Universities (AAU). The survey finds, with a much larger sample of students than ever before (150,000 attending 27 universities across the U.S.), what we’ve pretty much known for years: one in four college students suffer unwanted sexual incidents. The survey does include some of the first research on affirmative consent and is one of the largest to consider LGBTQ students. It also contains some significant data on reporting.

To many, including myself, the issue of reporting is one of the most concerning findings. According to the AAU’s new study, “even the most serious incidents” of sexual violence on campus often go unreported as survivors “do not consider it ‘serious enough'” and “a significant percentage of students say they did not report because they were ‘…embarrassed, ashamed or that it would be too emotionally difficult.” In the AAU survey, reporting rates were low, only 5 – 28 percent, depending on the specific type of behavior. In another survey the Washington Post-Kaiser Family Foundation poll conducted this summer, which included 1,053 female and male undergraduates at a four-year college (ages 17-26), only about 11 percent of students reported.

Last week I also learned about a new app called “Callisto, A College Sexual Assault Reporting System By Survivors, For Survivors.” The intention is to make it easier for college students to document their assault, with the option to report if they choose to. According to the developer, Callisto is designed to provide a more empowering, transparent and confidential reporting experience for college sexual assault survivors. This new app is being piloted at Pomona College and the University of San Francisco this year and will then expand to other schools if it’s successful.

This new reporting app is a good start in the comprehensive set of approaches we need to use to make students safer. But we still need to do a much better job as a society in addressing the root causes of sexual violence, which we can do with a solid foundation of media literacy education in elementary and middle school before harmful attitudes and behaviors become entrenched. While we’re working on that, let’s see how this new app does.

Callisto is designed to provide a more empowering, transparent, and confidential reporting experience for college sexual assault survivors.
How it works:
1. Visit your school-specific Callisto website, record what happened in an online form, and get advice on what evidence to collect and save.
2. Securely save the record, time-stamped when it was stored, and decide later if you want to take any action.
3. Report now or later: Learn about your school-specific reporting options and directly submit your record to your school. Or you can opt into automatically reporting if someone else reports the same assailant.

Huffington Post on the study
The Atlantic on Callisto app


About the Author: Leanne McGowan