Utah’s Digital Wellness, Citizenship, and Safe Technology Commission, a body charged with the goal of training every Utah student in healthy behavior related to technology use, was created in late March when Governor Gary Herbert signed it into law.

The commission is required to identify best practices and compile resources for training students in healthy behavior related to technology use and report to the Education Interim Committee and the State Board of Education.

In his remarks to the Utah House 2020 General Session, sponsor Rep. Keven J. Stratton, noted that House Bill 372 was the result of several years of work in seeking to promote digital citizenship and safe technology use among Utah’s student population. Digital citizenship skills are developed from a foundation of media literacy. 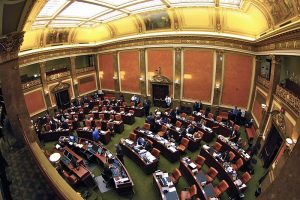 View of the Utah State Legislature at work. By Scott Catron via WikiMedia

The new bill was sparked by a roundtable on digital citizenship held in December 2019, which was attended by stakeholders from schools, school districts and boards, groups involved with the mitigation of child abuse and pornography, and others. The resulting recommendation was the establishment of a digital citizenship and wellness commission.

“I really appreciate the goals of this group,” Stratton stated. “Students will be digital media literate content creators, will know what to do when they make a mistake, will self-regulate, be ethical and leave a positive digital footprint. I think that’s a wonderful focus.”

Representatives from the Utah PTA, various school districts, and the Utah Education Association spoke in favor of the bill to the Senate Education Committee, where it passed unanimously. The Utah PTA noted that, although social media can have many benefits, it can also “create a substantial disruption to the child.”

The PTA, which supports responsible digital citizen behaviors, encouraged the development of best practices and resources for training students in healthy technology-related behaviors.

Jessie Mandle, a policy analyst at Voices for Utah Children, a nonpartisan advocacy group, was also a supporter, tweeting as the bill moved through the legislature, “This is a positive approach forward to support parents, communities and schools as we support kids.”

The new law establishes the key role media literacy plays in overall digital wellness, with one of its main goals being to ensure that all Utah students are media literate.  Additionally, the law specifically requires the committee to include a media literacy librarian.