Reports from the field: Junk food and beverages

I received the following text from my son (R.) in college: 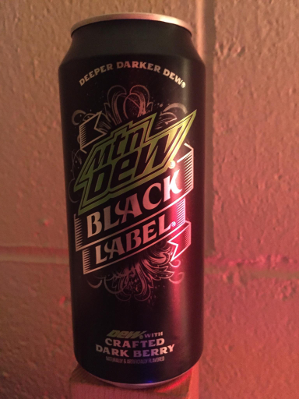 He followed it up with this quote he found in the recent, inscrutable New York Times commentary “27 Ways to be a Modern Man”:

The modern man buys only regular colas, like Coke or Dr Pepper. If you walk into his house looking for a Mountain Dew, he’ll show you the door.

This cultural reference, he said, backs up his theory that the company (PepsiCo) is trying to rebrand the soda as more mature, because it’s currently perceived as a drink for young kids. The boys did prefer Mountain Dew when they were younger but I haven’t seen it around the house lately. R. pictures the typical Mountain Dew drinker as Ricky Bobby’s kids in “Talladega Nights” (Ed. note: Will Farrell’s NASCAR satire, which we watched as a family back around 2006 – hilarious.)

R. said the new look doesn’t seem as childish and doesn’t taste as overpoweringly sweet and chemically. Here’s his take:

By naming it black label kids will grow up associating it with things like johnnie walker, or really anything that could be “black label”
e.g. american express black card
I’m not going to buy it but the next generation probably will

I thought it seemed to be going toward a craft beer look. What I wonder is the effect – does this simply expand the appeal to an older consumer, or does it encourage alcohol consumption among young kids by making them feel ike they are more cool for drinking a soda that looks like beer or whiskey? Also, it would seem to encourage consumerism with the upscale seeming “black label” moniker, as pointed out by R. What do you think?