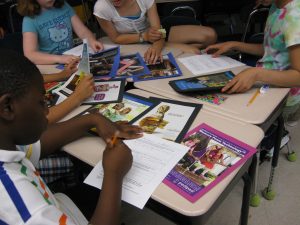 Students collaborate on media analysis in a 5th grade class. More students could soon be participating in similar lessons in Rhode Island thanks to the work of the state MLN chapter.

Our Media Literacy bill, which was introduced earlier this year in the Rhode Island Senate, has been reported out of the Senate Education Committee. The committee recommended passage of the bill on Wednesday, allowing the legislation to move forward in the process.

The bill, S 2089, requires the Rhode Island Department of Education to work with national or statewide media literacy organizations to incorporate media literacy education into the basic education program. MLN state chapter leader Michael Trofi worked with state Sen. Adam Satchell to introduce the bill in January. Trofi and Prof. Renee Hobbs of URI organized a number of media literacy educators to present testimony at a hearing on January 27. Those speakers were effective in persuading the committee members to act. The committee is now recommending that the full Senate pass the bill and send it to the House.

More information on the bill