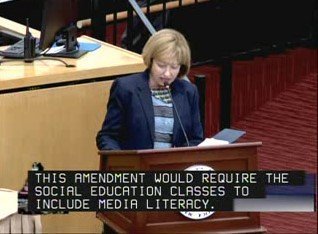 Thanks to the advocacy efforts of Media Literacy Now and Massachusetts Coordinator Tamara Sobel, the bill contains a provision requiring that sexual health education “incorporate opportunities for students to analyze societal and media messages.” An amendment offered by Sen. Cynthia Creem on the floor strengthened the bill language to say that such curriculum “shall” include media literacy, rather than “may” include media literacy. The amendment was adopted without objection.