Why Fox TV’s “Pitch” is so important and so cool

(Hint: It’s More Than Just a Show About Baseball…) 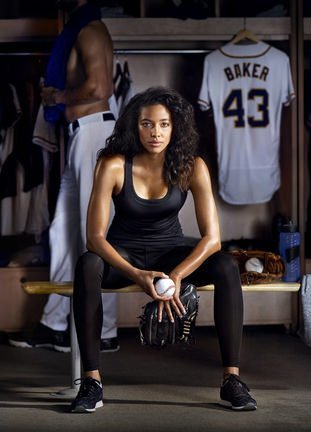 If you got used to tuning in to Fox TV on Thursday nights at 9 p.m to watch “Scandal,” you may have noticed a switch. With Kerry Washington and company moving to a different slot (apparently to accommodate Ms. Washingtons ‘ bundle of joy’), there’s a new game in town….literally.

If you haven’t watched “Pitch” yet, you’re missing out on a new drama that’s getting lots o’ buzz. The show is about a young woman who gets a shot as a pitcher in major league baseball, but it’s also about so much more (although the baseball action is totally authentic and pretty fun whether you’re a baseball fan or not.) The lead character, Ginny, is young, strong, smart (and smart-mouthed), struggling to prove herself, figure out who she can trust, stay true to herself, and enjoy living her dream while not exploding from the pressure of being a celebrity and role model. (And soon, there will be romantic developments involving one or two of her hunky teammates, but can’t spoil that suspense…)

‘Ginny’ is definitely one of the boldest, coolest young women on TV, an inspiration to all as she kicks down the “no-girls-allowed” sign on the door of America’s favorite pastime to become “the most important women in the world.” But in real life, star Kylie Bunbury is also exploding on the brink of major stardom and dealing with being a celebrity herself. Bunbury, who is totally gorgeous, was modeling then transitioned into acting. In her very first film, the Disney movie “Prom,” she said,

[acting] was ‘purely instinctual,’ it felt ‘totally right.’ (She’s also had roles on CBS drama “Under the Dome,” ABCFamily’s “Twisted.”)

But she’s definitely not just another pretty face. She played sports in high school, but when she got the role on “Pitch,” she had to go into full jock mode to actually learn how to pitch – no stunt doubles on her pitching mound. (She had only two and a half months to learn how to do the real thing, with the help of actual major league pitching coaches.)

She’s definitely got the talent, athleticism, star power, and look, and what’s especially cool is she’s not going all diva-diculous (at least not at this point…). After her first appearance on “Ellen” in late September, she shared a pic on social of her and Ellen, captioned with humility “i cant believe it either #whatanexperience.”

What’s also great is her girl-forward attitude and awareness of the way Hollywood can be prone to giving women more fluff roles and lesser opportunities in the entertainment business, something that a lot of advocates are trying to change. (If you’re new to that issue, definitely check out the facts, discussions, and advocacy from the Geena Davis Institute on Gender in Media, seejane.org.) Kylie recently said, “I’m very cognizant of the fact that it is so important for women to be represented properly in TV and film.”

Oh yes it is. So we can all help support the cause of great, groundbreaking roles for women in television and have fun doing it while just lying on the couch watching great dramas like “Pitch.” Activism in your PJs with popcorn on a Thursday night? Now that’s a winner.

About the Author: Tamara Sobel