This bill would establish a grant program to develop media literacy programs to be integrated in English, social studies, or health. It also would provide for two media literacy conferences to disseminate the work of the grantees.

Although this bill originally stalled in the legislature, in September of 2019 the Washington State Office of the Superintendent of Public Instruction (OSPI) announced a new media literacy education grant program. Funds ($150,000 were allocated by the 2019 legislature for 2019/2020) will be awarded through a competitive grant process for the development of K-12 curriculum units focused on media literacy or digital citizenship, or both, that may be integrated into social studies, English language arts, or health classes.  Washington State’s Office of Public Instruction Bulletin regarding Media Literacy Grants.

Your input to your State Legislators can help make a difference.  Don’t delay; give your input today!

This law requires the Washington State School Directors’ Association to:

(1) Review and revise its model policy and procedures on electronic resources and internet safety; and

(2) Develop a checklist of items for school districts to consider when updating their policy and procedures. It requires the office of the superintendent of public instruction to:

(1) Survey teacher-librarians, principals, and technology directors to understand how they are currently integrating digital citizenship and media literacy education in their curriculum; and

This law, signed by the Governor on April 20th, 2017,  follows up on recommendations from the OSPI (Office of Superintendent of Public Instruction), as a result of the implementation of Washington’s Senate Bill 6273, the basis for the national policy model that Media Literacy Now is rolling out to states around the country.

As technology becomes more prevalent, students must learn how to safely, ethically, responsibly, and effectively use technology. This law  enables students, parents or guardians, teachers and other school employees, administrators, volunteers, and community representatives to engage in an ongoing discussion on safe technology use, Internet use, digital citizenship, and media literacy.

Washington’s Office of Superintendent of Public Instruction (OSPI), along with an advisory committee, is now empowered to develop best practices and recommendations, including instructional guidance about thoughtful, safe, and strategic uses of online and other media resources, and education in how to apply critical thinking skills when consuming and producing information.

This law changed the name of the school-library media program to the school library information and technology program. It also expanded the duties of the program and the teacher/librarian.

AN ACT Relating to school library information and technology programs.
The teacher-librarian’s duties may include … collaborating with his or her schools to:
Instruct students in digital citizenship including how to be critical consumers of information and provide guidance about thoughtful and strategic use of online resources…

Back to US Map
Go to Washington Chapter page 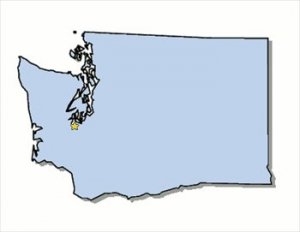